“Create a Visual Map that represents: Your background, training, discipline, personal circumstances that led you to where you are today. Show cross-references. You pick the form, or metaphor: a subway map, a table of index in the back of a book, a menu on a webpage, etc. ”

I went through a few prototypes for this project.

Class discussions of the project focused on the idea of parallel forces that combined to create us and our situation. The notion of ‘parallel’ inspired my first prototype map in chart form. Each column contains elements of a categorized parallel force. Time is the main force that everything else is synchronized to. The forces are arranged in order of least to most significant (with regards to its impact on where I am today) with the width of each column increasing to portray the increased significance. 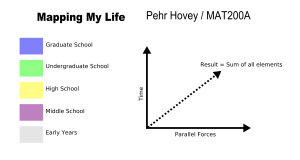 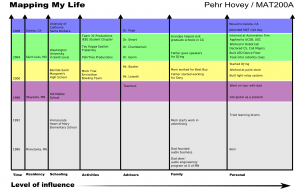 This initial prototype was useful for developing the textual content of the map but was not very innovative or unique.

For my second round of design I pondered creative ways to represent ‘parallel forces’ that sum to create myself. I thought of the meaning of self and what makes us who we are. I realized that our experiences are in the past and as such exist almost exclusively in our minds.

Much like the current contents of the Random Access Memory (RAM) in an operating computer define what is on the screen and what is running (its current state), the contents of our brains define who we are and where we’ve been. More specifically, I thought of  the neurons within our brains. 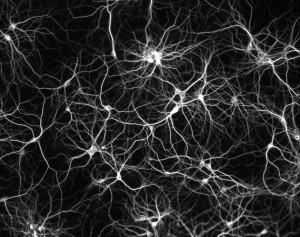 The above image was found from a google image search and helped me layout my map. I drew a stylized neuron on paper using marker and scanned it into Inkscape for manipulation and layout. I decided that each parallel force would be a thick ‘trunk’ of the neuron and would converge upon the center which would represent my current being. 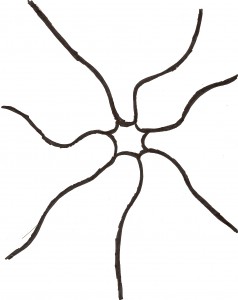 To show the interconnections between trunks I drew squiggly lines reminiscent of the mass of tendrils connecting all the neurons in the inspiration image above. I keyed everything to Time, as in the initial prototype so layers of interconnections are color-coded based on the time axis.

For clarity, two additional versions of the map were produced. Since the goal was to depict a mass of interconnections the true map can be difficult to read. Thus the map is also available in text-only and solid-color versions.

The mapping exercise was presented as a series of images. 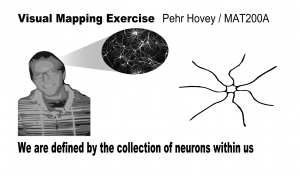 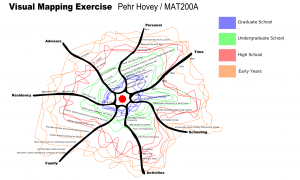 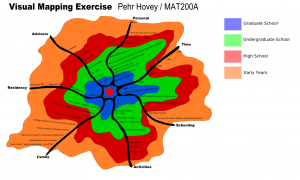 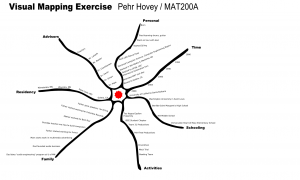 posted on Tuesday, November 11th, 2008 by Pehr in MAT Projects