The OK Go ‘This Too Shall Pass‘ Rube Goldberg video is already at 3 million views after three days and looks like it will continue being the most talked about video on the web. It is already the #1 top rated music video on Youtube of All Time! 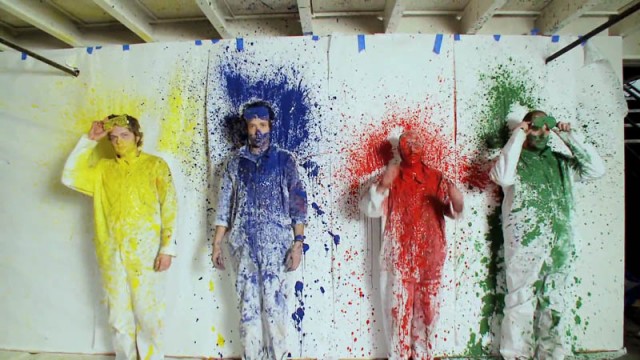 Still from "This Too Shall Pass"

I got involved with the OK Go project in September when we sent the first proposal for Syynlab’s involvement in the video. Since I currently live in Santa Barbara I drove 90 miles to Los Angeles six weeks in a row during the build. Despite my part-time build schedule I was fortunate to get to work on several different parts of the “machine”. What follows is an overview of  some of the machine elements I was involved in. An in-depth making-of documentary and interactive flash ‘blueprint’ of the machine will be forthcoming on the band’s website so stay tuned! 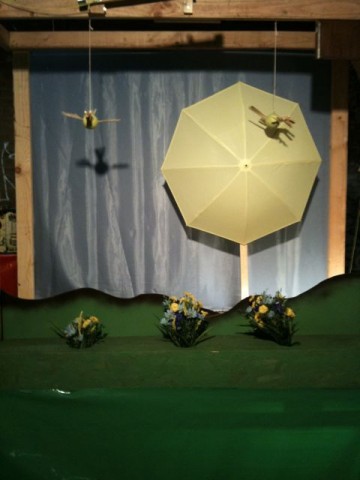 The sun is a yellow umbrella mounted on a counter weighted lever which is held out of view by a string that is pulled taut. When the holy-man moves upwards (triggered by the shopping cart hitting the red banner) the string on the sunrise releases.When the sun lever pivots up the counterweight strikes another lever which falls to trip the string holding the flowers down. 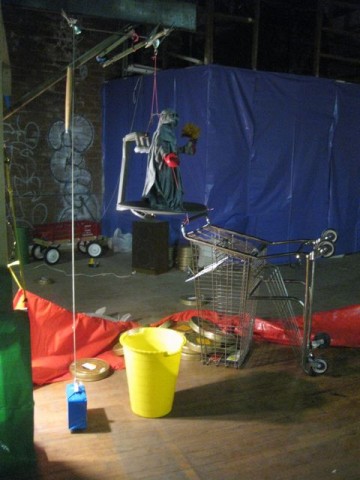 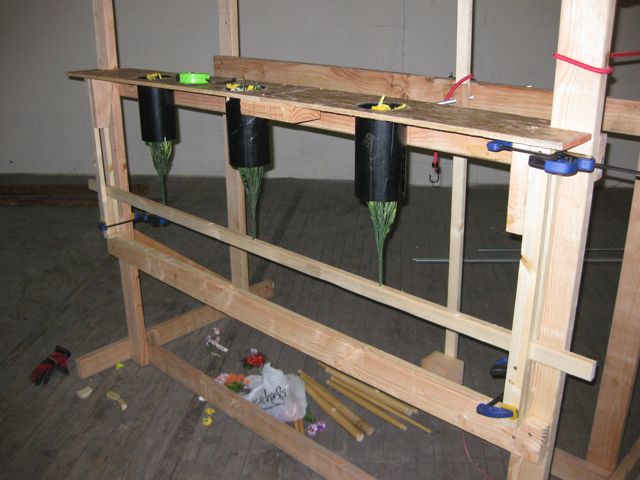 The flowers are attached to a drawbar which is pulled upwards by two bungee cords. A rod attached to the flower bar on the left side pushes up to flip another lever over. This lever’s movement releases two birds and also pulls a pin which held a bird nest in place. The bird nest zips down a rope to trigger the toy crossbow. 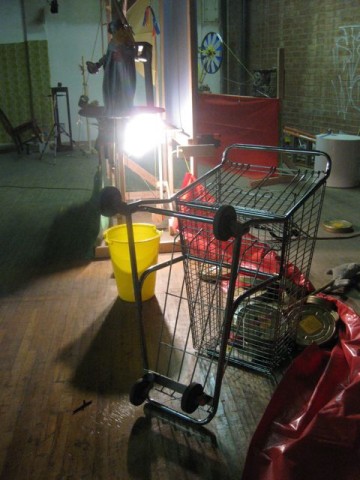 The ping pong ball shower rained over 1,000 orange ping pong balls on Andy, the band’s guitarist, and generally everywhere on the first floor. We put a makeshift shower curtain around the device during test shoots to limit cleanup time but for the real deal we let the balls go everywhere. This part alone took 10 minutes to clean up after each take! 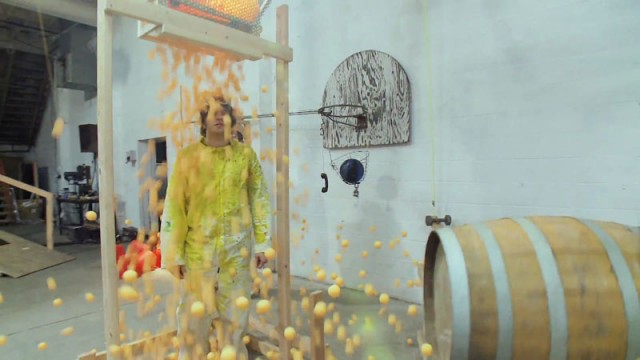 Still from "This Too Shall Pass"

The hopper has two doors on the bottom that are held shut with a one inch long metal pin. The pin is pulled when the basket on the wall travels down (releasing the barrel at the same time). I made a chute that connects the ping pong ball container to the top floor via an old air vent (which is visible behind the water glass chimes next to Damian). We wanted to have a contraption on the top floor that spills the ping pong balls down the vent to fill up the dropper but there was not enough floor space to fit it in. Instead the bin of cleaned up ping pong balls was dumped down the air vent before each take. 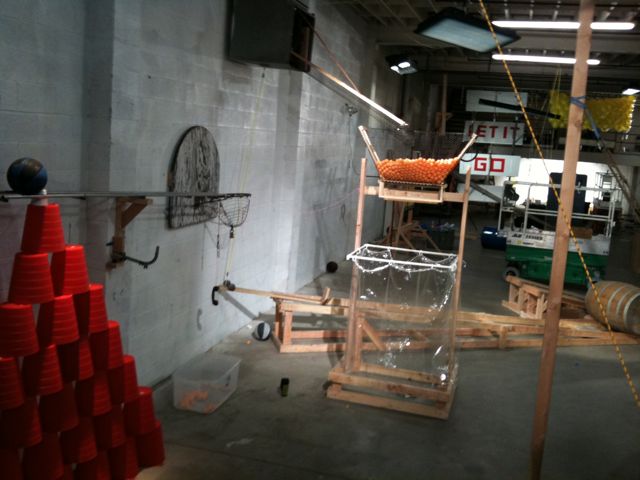 The Tire is triggered when a tennis ball launches from the first big table and knocks over a trash can. This transition was originally much more complex but took too long (song-wise) so we replaced it with the tennis ball catapult. We used a white bookshelf that the band had left over from a previous project to prop up a trash can. 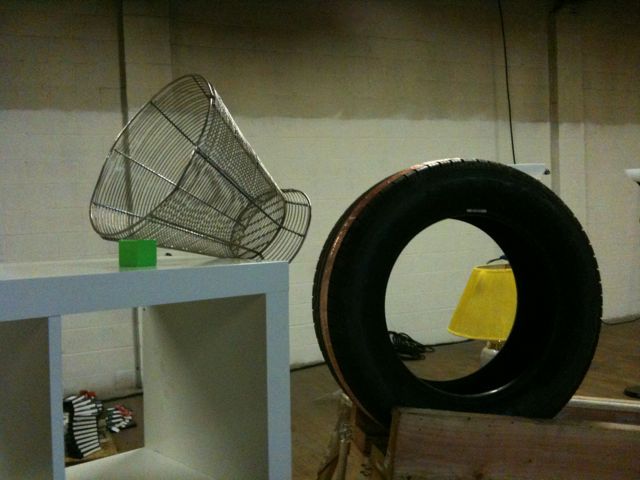 The retro wire trashcan we started using ended up completely unraveling after falling to the ground several times in a row so it was switched it out in favor of a surprisingly sturdy yellow plastic one.

The lights behind the ramp are switched on by light switches mounted in the ramp itself.  Pieces of flexible orange Hotwheels racetrack are epoxied to each switch to act as levers that catch the tire as it rolls by. They are not very visible because if they were too long they might slow the tire or break off. 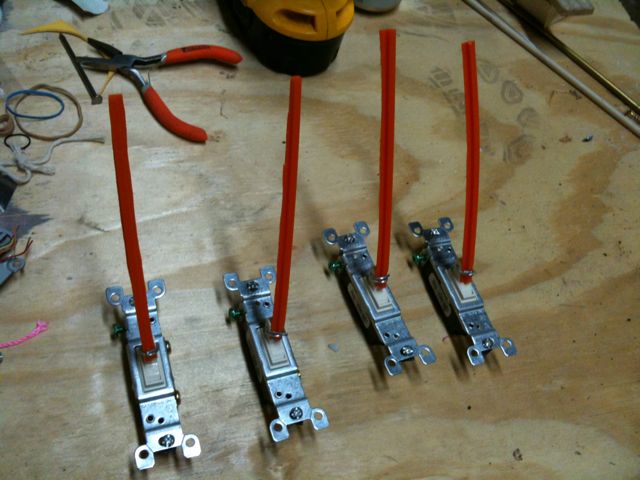 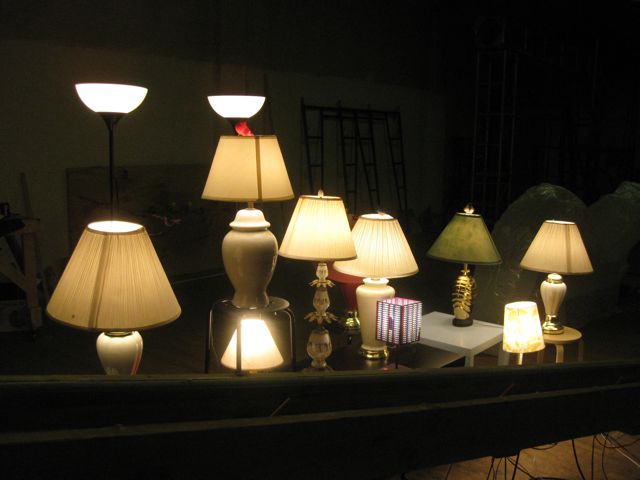 The light display behind the tire ramp

The grand finale paint cannons are a constructed out of ABS and PVC plastic piping and electrically operated sprinkler valves. 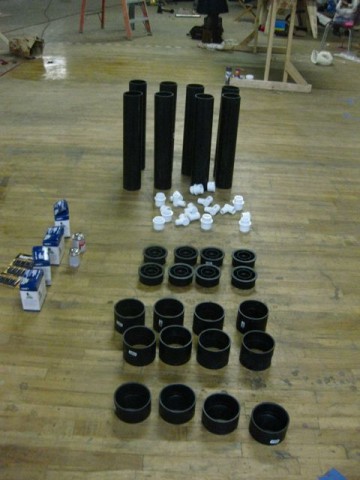 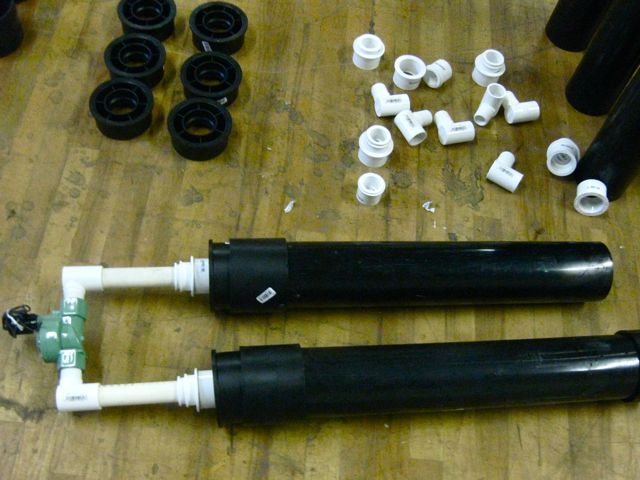 Test fitting the paint cannon parts before gluing them in place

One chamber is totally sealed except for a tire valve stem and is pressurized between takes with an air compressor. Some diluted nontoxic tempera paint is poured into the other barrel and sits in front of the sprinkler valve until the air is released. The original cannons had 4″ barrels along with 4″ air chambers but we found the barrel was too wide to propel the paint far enough (most landed on the ground). The final cannons have 2″ barrels to direct the paint better. 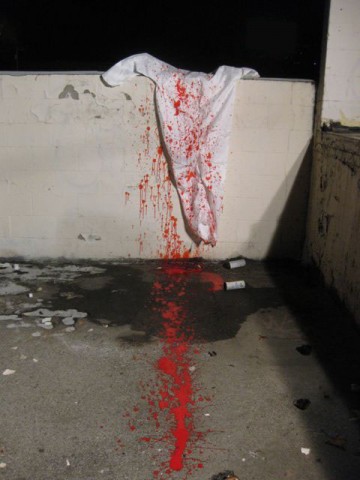 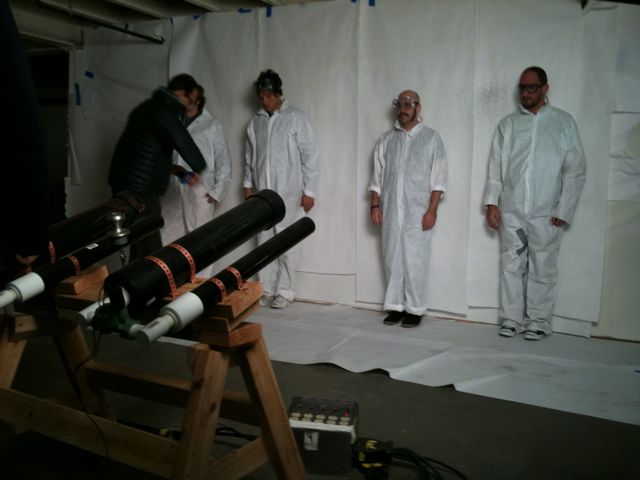 With so many moving parts it was very important to ensure everything was reset properly before each take. Since several parts of the machine are downright dangerous we also had safety mechanisms for them which also increased the likelihood of a failed take due to human error. To reduce the chances of such an event we assigned people to manage chunks of the machine, with additional people to help reset individual modules.

During the shoot I was in charge of the tether-volleyball (knocked off by the piano drop swing-arm) through the bird nest release after the sunrise. I was greatly assisted by Amrik Lally, Mahdroo McCaleb, Mike Pauken who were quick and precise with resets. The shopping cart is triggered when a vintage 1950′s GE electric waffle iron goes sliding down a ramp created by a piece of the destroyed piano. The momentum of the waffle iron pulls a 10lb weight down which is attached to the metal pin holding the shopping cart in place. When we picked that up at the thrift store the cashier commented that it makes good waffles, little did she know it would get so destroyed we had to tie it together with steel wire! 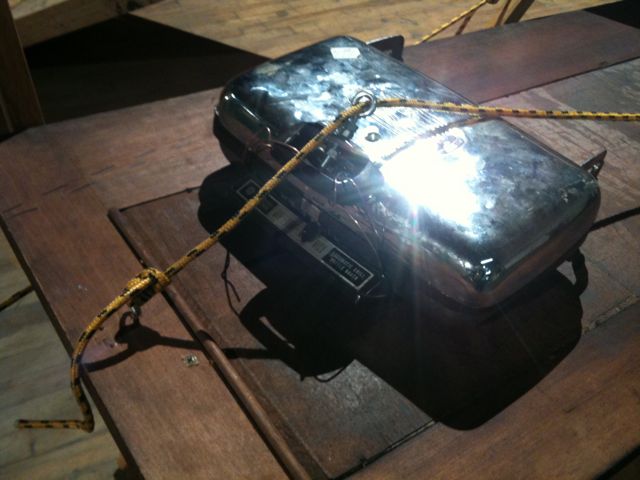 The shopping cart is filled with discarded Kodak film canisters from various TV shows and a stuff dolphin on a pole named Skippy from a local thrift store. 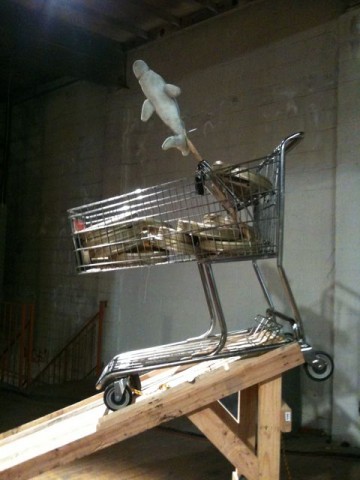 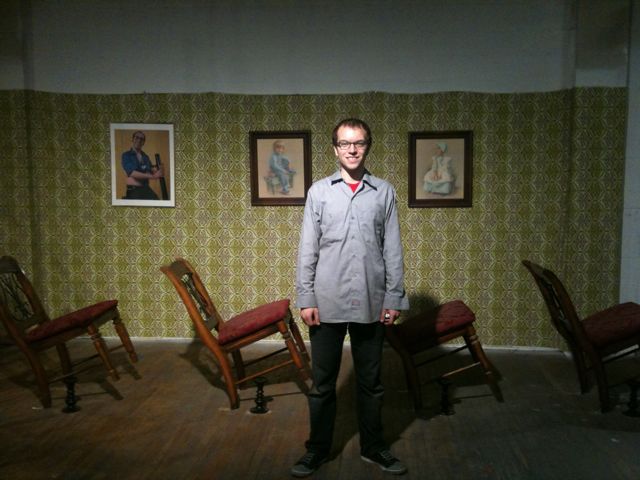 Me in the 'dining room' with Tim's portrait in the background 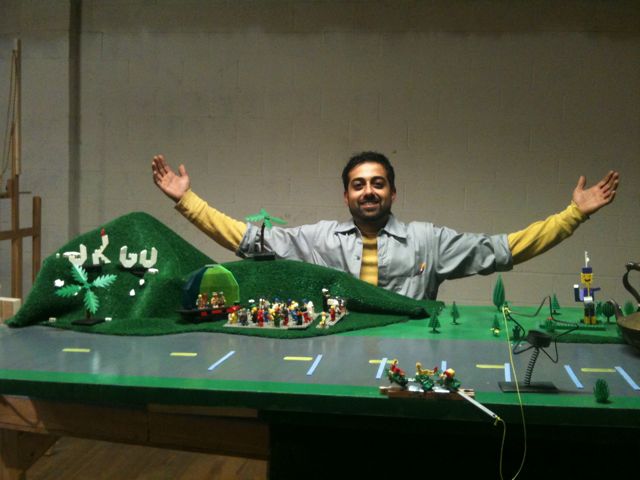 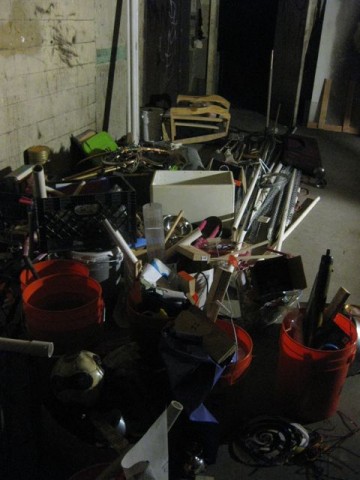 And finally, here is a panorama I made of the top floor of the machine after filming wrapped. The lighting crew had left so its a lot darker than the real video but you can see how everything was laid out.

posted on Thursday, March 4th, 2010 by Pehr in Side Projects