Today I started constructing the physical sensors that will control these visualizations. I so far have some sliding potentiometers to control continuous parameters (speeds, quantities, etc) and push buttons to control boolean flags that enable or disable various modes and extra features for the animations.

I will be adding rotary knobs as well as a distance sensor to react to proximity. Time-allowing I will also integrate my webcam to have the colors in the animation influenced by the colors of the environment or what the user is wearing.

The sensors are attached to my Arduino which reads the values and sends them over Serial via USB to my laptop. My animation program reads and reports these values. I programmed the sensor code to run in a separate thread to avoid slowing down the animation window while reading and reacting to the sensors.

Below are pics of the sliders as well as more recent screenshots of the animations.

Click each image twice to see the full resolution. 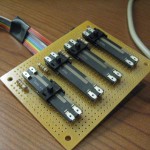 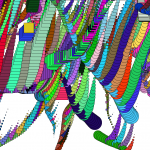 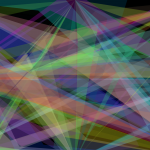 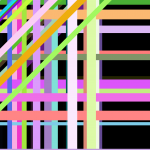 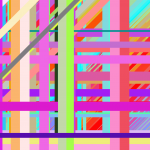 posted on Monday, December 8th, 2008 by Pehr in MAT Projects