I developed some new animations for September Mindshare at the old Stock Exchange in downtown LA, including “Turtle”– an experiment with creating complex structures by expanding on the concept of Turtle graphics. The left and right turn angles are variables and each turtle path is rotated and drawn multiple times to create rotational symmetry. Once [...] 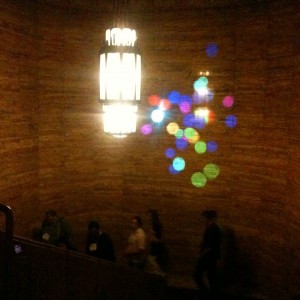 The August edition of Mindshare was at the former Pacific Stock Exchange building in downtown Los Angeles. The building was built in 1929 and has great brown stone walls throughout. We were initially unsure of the effect of projecting onto this surface but the results were great. The colorful abstract shapes were imbued with a [...]